When Mr. John Powley died on 14th March 1830, aged 76 years, the Westmorland Gazette reported that he had been ‘for upwards of half a century, the much-respected landlord of the Kings Arms Inn’. This takes us back to approximately 1780.

Sometime after 1780 and before 1817[1], Mr. Powley built his Assembly Rooms, opposite the Kings Arms Inn, where he could hold larger occasions.  If you look below the gratings in front of the Kings Arms (now Hotel) you will see cellar entrance doors.  These doors lead into tunnels that link to the Upper Eden Visitor Centre cellar, allowing Powley to easily transport barrels of beer and spirits.  The outside staircase is common on local older buildings, allowing access to the upper storey without taking up room in the interior.

After 1817 and before his death in 1830,[2] Mr. Powley also renovated the Kings Arms – from his ‘Old House’ into the Kings Arms with an additional storey, central bay windows and portico much as it is today.  Rear stabling and accommodation rooms served the coaching trade particularly after the Turnpike Roads to Sedbergh and Brough were built.

The Powley name was respected throughout the Eden Valley.  Poet John Close says ‘the Pedigree of the Powleys can be traced far, far back into the Dark Ages, when Monks and Ancient Fathers were only Scribes and could handle the Pen of the read Writer, but was carefully preserved in their Illuminated Manuscripts. And recorded in glowing language the most flowery and sublime, the heroic deeds of those Mighty champions and bold Barons who shook England to her centre, and the Monarch trembling on his throne, and who were the Founders of the Powley Dynasty.’  Whilst there does not appear to be any association with King John and the Magna Carta, Powley is said to be an old Welsh name derived from ap-Hoel or ap-Howell.

Here in Kirkby Stephen there was a John Powley alive in 1665, accused of ‘dealing in raw hides on the open market contrary to the law of James I, which laid down that the “mysteries” of tanning were to be carried out only by guild members.’[3]  The names of other Powleys and indeed other John Powleys crop up in records through the centuries, including a John Powley of Eden Hall in 1803.[4]

The John Powley of this plaque, owner and landlord of the Kings Arms Inn and Assembly Rooms, seems to have been a very colourful character as the following two reports illustrate.

‘Extraordinary Leap. - Last week, a fine blood hunter, the property of Mr JOHN POWLEY, of Kirby Stephen in Westmoreland, whilst in chase of a hare, cleared the wall of Ravenstonedale Park, which is six-foot high and four feet thick, with Mr Powley on his back.’[5]

Leading out of the street of Mellbecks, and entering the main street about twenty yards south of the King’s Arms Hotel, is a narrow lane, about four feet wide, called Little Wynd, which about a century ago was selected for a foot race.  The then landlord of the King’s Arms was a jolly old gentleman, as far famed for his wit and humour as the Inn itself for its “good cheer”. Amongst his customers was one who continually boasted of his “speed of foot”, and as such men are apt to do when they well know there is no one present likely to contend with them, time after time challenged all and sundry to the contest.  Mr. P who was tall and broad and strong, as became a man who weighed twenty-seven stones, accepted the boaster’s challenge and offered to run him a race of a hundred yards provided he might choose his own ground, and have ten yards start.

The terms were accepted, the competitors and company adjourned to the street, the starting point was near the entrance to the stable yard, ten yards was measured, the competitors placed and, the signal given.  The boaster rushed off confident of victory, Mr. P made a few steps forward coolly, turned into the Little Wynd before his opponent could come up with him, and as the portly landlord was by no means in training for a fast race, he walked leisurely until he had covered the distance; his height, width, strength, and the swing of his powerful arms effectually preventing his more agile opponent getting either over him, or under, or past him, and thus easily winning the race.

We may be sure that it was long before “the swift footed” boaster heard the last of his hundred yards race, and the old men at Kirkby Stephen have not ceased to talk about the victory of the well-known and popular landlord, Mr. Powley, or forgotten the “merry twinkle” of his eye, as he told some strange customer how he had once run a foot-race of a hundred yards, with ten yards start, against a well-known runner, and won easily.’[6]

The Assembly Rooms fell out of use and at some time a Ballroom was made at the rear of the Kings Arms when the stabling was no longer required.  The former Assembly Rooms were used as Westmorland Rural Council Offices (with Public Toilets below) before the Tourist Information Centre was opened, originally upstairs, in 1984. The later downstairs conversion was made after the toilets moved to a new building in Stoneshot.

In its heyday there were regular newspaper reports of the splendid occasions enjoyed:

‘Dancing – On Wednesday last, Mr. Barwick, had his Ball at Mr. Powley’s large assembly room. In Kirkby Stephen, where a display of several new and fashionable dances secured considerable credit to the teacher; and the pupils gave infinite gratification to a numerous and respectable company.’ 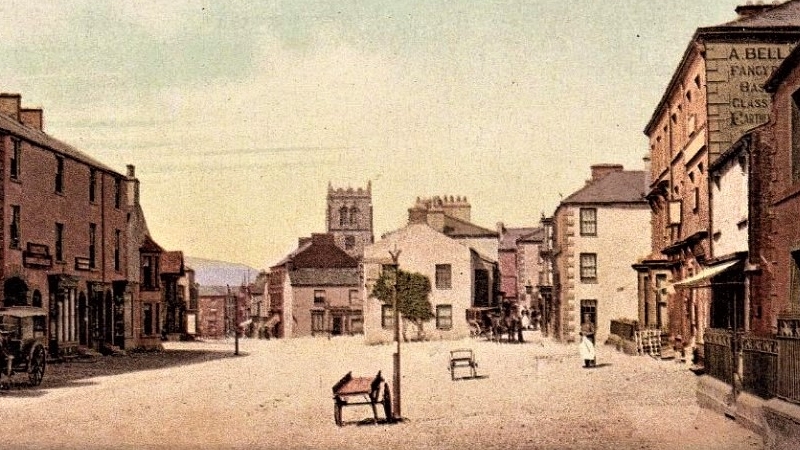