One of the oldest known references to this prestigious location facing the Market Square, was in the 18th century when owned by Abraham Dent.  Abraham was the son of shopkeeper and wine merchant, William Dent.  Some of Abraham’s accounts, dating from 1756-1777, were found many years later and published by Professor T. S. Willan in 1970.[1] The documents have provided fascinating information detailing this early shop.  Abraham stocked amongst other goods, tea, sugar, soap, tobacco, spices, thread, ribbons, quills, almanacs and patent medicines, almost anything that was in demand that was not be made locally.  You can imagine the excitement in Kirkby Stephen when Dent’s new stock arrived.

Dent was also one of the biggest traders in locally knitted stockings.  Wool to knit stockings, which were long socks, was distributed to local people on Market Day and collected a week later for onward transport to London, taking two weeks along the packhorse routes.  Dent is known to have traded in over 1,000 pairs of stockings per year.  During the American War of Independence (1775-1783) and the Napoleonic Wars (1803-1815), stockings were in great demand for our army and this trade became an important additional income for subsistence farmers of the area.  All the members of the family took part and even male drovers were said to knit, on horseback, one-handed in the traditional manner, with a knitting sheath tucked into their belt.

Dent branched out into brewing, first mentioned in 1784 when he was a partner in the Dent, Portrees and Mason brewery.  This partnership disbanded in 1786 with Portrees setting up a business in Liverpool and Dent mortgaging the premises.  Described as ‘A common brewery, a counting house, a shop and a malt house and two inns, The Golden Fleece [now Walton’s Yard, Market Square] and The Sun Inn [now Stoneshot].’ What remains of Abraham Dent’s brewing industry with a 15-foot seepage well and cold storage are in the manmade cellar below Stoneshot that has been annexed from the rear cellar through a short tunnel.

In Dent’s day, this was a two-storey building as drawn by Thomas Fawcett in his bull-baiting illustration dated 1817.  Fawcett names the building as the ‘Old Brewery’.  In J. W. Braithwaite’s day, a third storey had been added with a hipped roof, quoins, sash windows and a Victorian shop front as illustrated below.  Alterations have been made in the 20th century blocking windows on the north and south facing walls.  The stepped buttresses to the eastern corner mark where a building and an arch of The Sun Inn was knocked down for improved access into Stoneshot.  At one time, Dickinson’s Yard, named after the then Sun Inn owner, was surrounded by housing, also demolished in the 1960s.  Just in front of these buttresses is a cellar entrance which has a piece of tracery used as a balustrade.  It is likely that this masonry was a section of a church window replaced in the 19th century.  The building is Grade II Listed referenced as ‘shop to north east corner (Market Square)’ and at the heart of Kirkby Stephen Conservation Area.

John Waistell Braithwaite (1850-1934), was the son of Robert Braithwaite (Westmorland born -1890) and Margaret nee Capstick (born 1819, Crosby Garrett).  Father Robert was a stonemason working with our local Brockram stone.  John worked as a booking clerk at Kirkby Stephen East Station where he was drawn by Poet John Close (1816-1891) in approximately 1870 as illustrated below.  By 1881, John was a postmaster, bookseller and stationer and is later listed with Bill Poster and Book Trades as his business occupations.

J. W. Braithwaite is particularly remembered for publishing a series of Kirkby Stephen and district guides for the early tourism industry.  The books include interesting information about the town, legends, history and walks and, are invaluable as historical sources.  A later version dating from 1938 features scenic car routes in the area for visitors.

Between at least 1890 and 1892, Braithwaite’s published the Kirkby Stephen & Appleby Monthly Messenger.  This included the serialisation of John’s ‘Trip to the Far West’, ‘The Incidents and Adventures of 16,0000 Miles by Land and Sea’.  John was an early member of the Cumberland and Westmorland Antiquarian and Archaeological Society (CWAAS), an amateur geologist and an avid potholer and caver.

The Braithwaite children and grandchildren worked in the business into the 1950s with Mabel Wharton née Braithwaite in charge of the shop.  The business was sold to “Jones the print” and Peter Coward became his apprentice.  The Hall family took over and ran their newsagent’s business from 2005 selling to Tom Perkin and his family, the current owners, in 2019.

The Sun Inn as illustrated by Ann Sandell 2019.  This drawing has been made from a selection of photographs taken when The Sun Inn was trading and later, when the building was demolished.

Braithwaite shop on Market Square from a postcard. The cars in the photograph suggest that it may have been taken just before WWII. 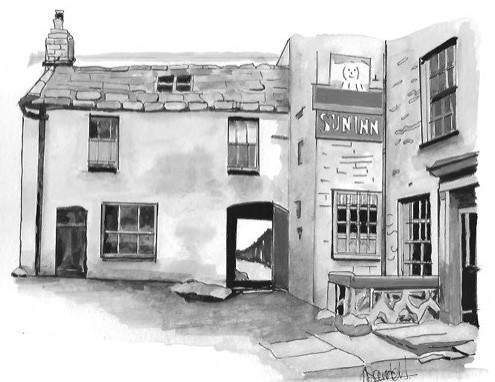 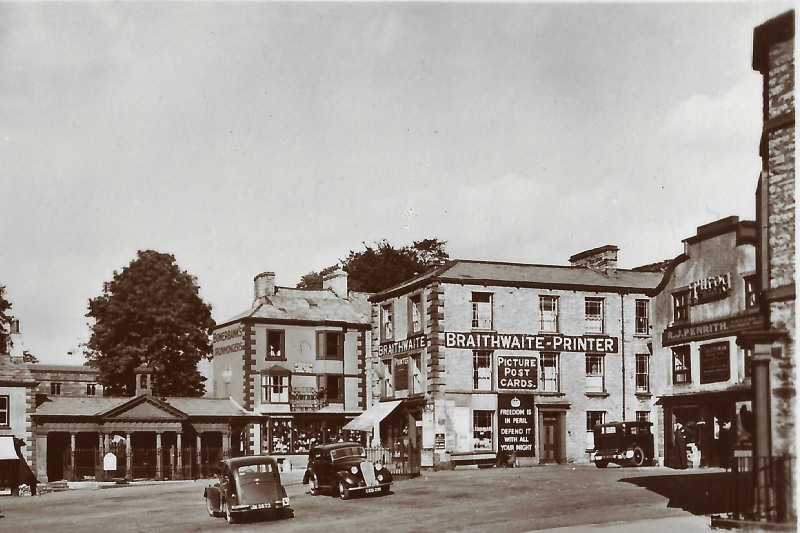 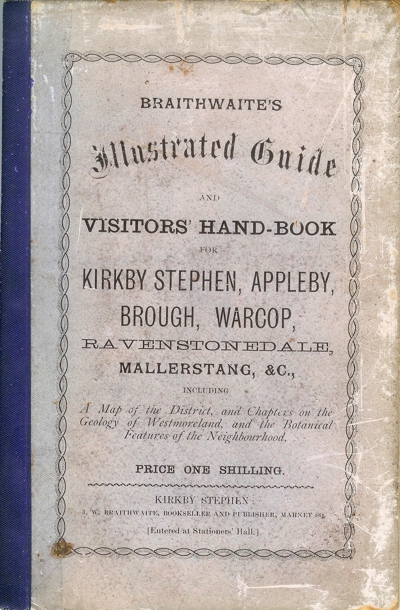