The 18th century saw the rise of many small non-conformist religious groups and sects were active in and . Among these were the Inghamites (followers of Benjamin Ingham 11 June 1712-1772), enthusiastic German Moravian Methodists. There was a popular Inghamite chapel at Birks near Sandford[1] with their influence said to extend from north Stainmore to Shap. It was common for these early groups to meet in the countryside to comply with the Five Mile Act of 1665.

James Allen was sent by Ingham to observe the Sandemanians in Scotland in 1761 (followers of Robert Sandeman, previously a follower of John Glass, born Perth, Scotland 29 April 1718, died Danbury, Connecticut 2 April 1771). James was converted to the Sandemanian alternative beliefs. Returning to his hometown of Gayle, near Hawes, James started a Sandemanian group in the former Inghamite chapel, built in 1755.[2]  This can still be seen today with the burial ground and was later used as the Village Institute.

It is recorded that on 9 May 1761, it was ‘agreed that Thos. Shepherd should purchase a barn at Kirkby Stephen and have it repaired for a convenient meeting house.
‘James Allen preached for the first time at this new Sandemanian chapel Sunday evening 17 May 1761.’ [3]
James was a highly regarded persuasive public speaker and a prolific hymn writer. By 1763, it is documented, that Allen had Sandemanian churches in Gayle with 8 members, at Newby with Kirkby Lonsdale with 16 and in Kirkby Stephen numbering 30 members.

Sandemanian, like Glassite (John Glas followers), was based on early Christianity as practised by the first century Christians adhering to the instructions of and the New Testament. Elders were appointed from the church brethren to make decisions on behalf of the members. They held a weekly agape, or “love feast”, sharing a common meal after their Sunday morning service. Members were vegetarians, believing that partaking of animal blood would taint Christ’s blood of the communion. The washing of feet was practised as the example set by Christ and showed humility. Non-members were welcome except at communion.[4]

Today, the building is named Faraday House after the Faraday family connection. Richard Faraday, (1757-1815), married Mary Hastwell of Kirkby Stephen Parish by licence on 20 January 1777.[5]  Richard had seven children, two houses, a carding mill and a close, named Mill Close, adjoining the mill dam. This is on the site of today’s Low Mill wood yard. The mill was converted in 1858 by William Hutchinson, son of carpenter and Wheelwright into a sawmill. The mill remained in the Faraday family until 1879 when sold by D. Faraday. It is after this locally respected family that is named. Richard and his family all worshipped at this chapel.

Richard’s younger brother was James Faraday, (8 May 1761 – 1810), married to Margaret Hastwell, (1764-1838), in 1786. They were also Sandemanians. James was a blacksmith in Outhgill, Mallerstang, where the old Post Office was until closure. James, with failing health and his wife Margaret pregnant, moved to in the winter of 1791. Son Michael, named after Margaret’s father, was born 22 September. Michael was poor in his youth and his formal education was practically non-existent. “My education”, he is quoted as saying, “was of the most ordinary description, consisting of little more than the rudiments of reading, writing, and arithmetic at a common day school”.[6]  However, his mother’s devotion and their Sandemanian faith sustained him to become one of ’s most eminent scientists, “the father of electricity”.

The Sandemanians had a reputation as an unorthodox church with peculiar practices. Michael Faraday said, “a very small and despised sect of Christians”. However, this is largely undeserved as they lived out a quietly devout Christian life based on early Christian principles.

There is a small burial ground at the rear of the chapel but the records for these burials have long been lost.

After the Sandemanians, the chapel was used by a string of non-conformist and independent religious groups including the Baptists until the Congregational Church, outgrew the chapel with over 100 members. They built a new church costing £1,750, almost opposite in , which was opened on 12 October 1865.[7] The Sunday school at the old chapel was finally closed in February 1894 and reopened in a new building at the back of the Congregational Church, with 70 scholars, on Sunday 8 July 1894.  One of the Elders was William Hogg, the first Kirkby Stephen East Station Master.[8]

The old chapel served for a time as a stocking knitting factory. The traditional tongue and groove half-panelled walls have been retained. Faraday House is used today as storage for Haughey Antiques.

[4] SMITH John Howard, 2008. The Perfect Rule of the Christian Religion, A History of Sandemanianism in the Eighteenth Century, of press,

[5] RILEY Jane F., 1954. The Hammer and The Anvil- A background to Michael Faraday, Dalesman Publishing Co

The sketch below is  by UEHS member Ken Martin. It shows the interior of the chapel as it probably appeared in the 18th century. He notes that gas lighting was probably not installed till the 19th century. 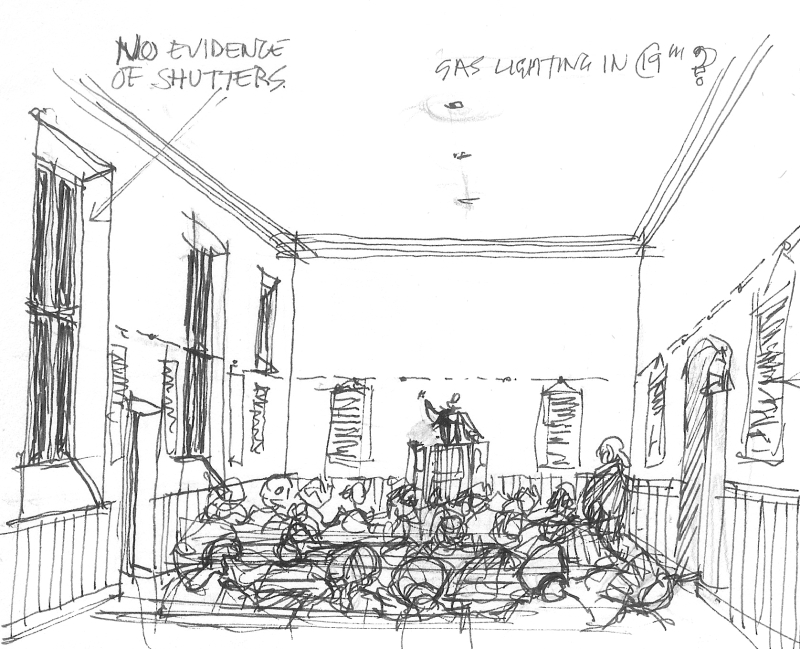