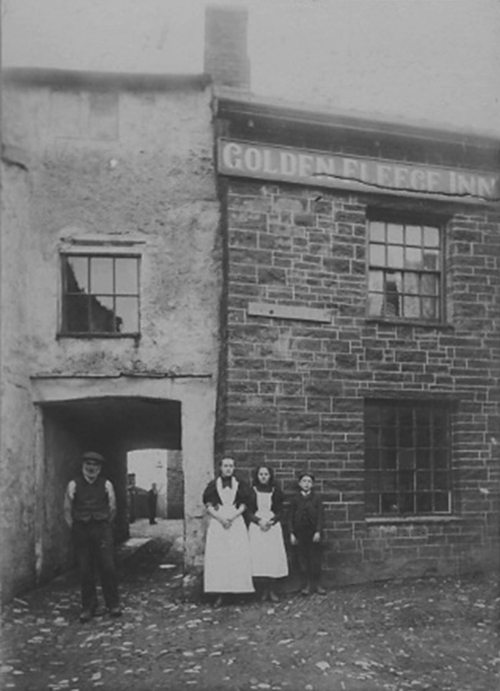 This inn has provided hospitality as both ‘The Fleece’ and ‘The Golden Fleece’ through its time. With so many changes over the years, it is difficult to ascertain the full extent of The Fleece Inn other than there was a coach arch which allowed for access to the side of the building and the rear yard, possibly with stabling, which is still evident. There were inn rooms upstairs stretching towards the rear. 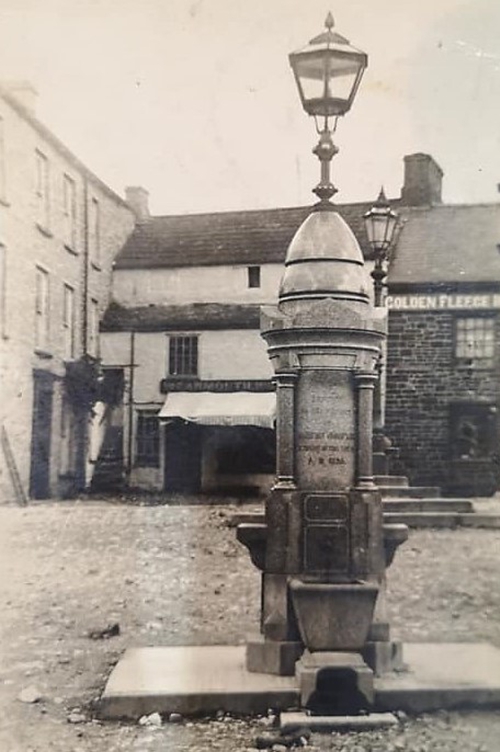 The Golden Fleece with the shop next door, before building changes,
fronted by the Harrison drinking fountain.
Photographed before 1902 when the fountain was moved.

The northern side of the arch was a separate shop which you can just make out in the above photograph, possibly named ‘Wearmouth’. Thomas Walton purchased the premises in 1912 (see Walton’s Yard) after The Golden Fleece had called “last orders”.

The early history appears to be tied up with The Sun Inn, belonging to Dent, Portees and Mason when the property was mortgaged by Abraham Dent in 1786 as: ‘A common brewery, a counting house, a shop and a malt house and two inns, the Golden Fleece and the Sun.’ [1]

The Yorkshire Dales National Park have published the story of carriers, Robert Bousfield and Miss Elizabeth Nelson operating between the ‘Rose and Crown’ Inn in Kendal and the ‘Golden Fleece’ in Kirkby Stephen around 1906 in ‘A family of carriers: the Nelsons of Newbiggin-on-Lune’ by Karen Griffiths. See website.