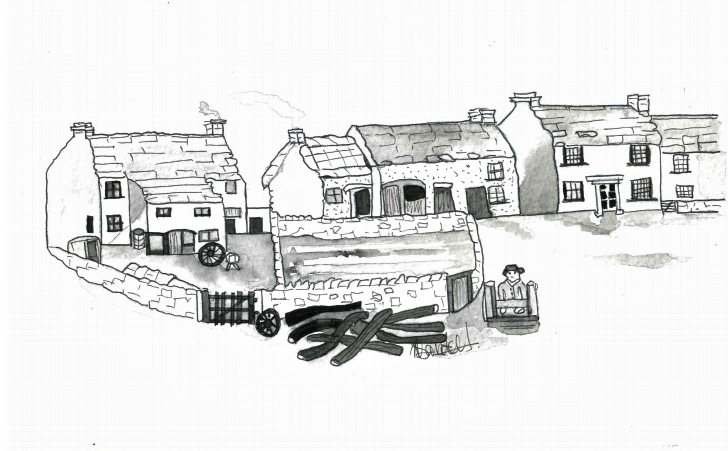 Prior to this short row in North Road being built from the corner of Hartley Road (Water/Beck Lane), this area at the northern end of The Green, was known as Tinkler Hill. The house behind 21 North Road is still addressed as 1 Tinkler Hill. At the beginning of the 19th century as illustrated[1], William Hutchinson had a walled and gated yard with workshop on the corner of Hartley Road also accessed from his house at the back of the plot in the lane (some of the house wall can still be seen.) William was a wheelwright and carpenter. To the south of this yard, beyond a small walled garden, were the town stocks. Anne & Alec Swailes[2] report that ‘According to Joe Steel, Jos and Nan Swale, two gypsies, were the last two people to be placed in the stocks but he does not give the date.’

Before leaving the Hutchinsons, it is interesting to note that William, son of John Hutchinson and grandson of the aforesaid William Hutchinson, married Elizabeth Loadman, “the girl next door”, daughter of William Loadman, blacksmith. William the younger Hutchinson acquired the water powered carding/cotton mill in Hartley Road (Beck Lane) from the Faraday family and converted it into a sawmill[3].

Towards the end of the 19th century, buildings appear on the current alignment, but it is not until the 20th century that we have any information for the occupants. In 1901[4], the Alderson brothers occupied 21 North Road as Saddlers, Boot & Clogg Makers. George Alderson (b.1865 KS) was a saddler and his brother, Robert (b.1871 KS) was a clogger. They were the sons of George Alderson (b.1834) and wife Jane (b.1831). George senior was a saddler with premises in Silver Street and later in Main Street. George junior died in 1905 and Robert, still a clogger, is shown as living as a lodger in 1911[5].

Advert for the saddlers, from Methodist Circuit Magazine 1908

The Tattershall family took over the premises on 18th May 1929[6] and turned them into a Fish and Chip Shop, which has remained the main trade to the present day. By 1939[7], number 19 had been incorporated into the ‘Fish & Chips’ business run by Cecily Bainbridge (b.1907), (possibly a Tattershall daughter) living with her daughter Aileen Thomas (b.1926). At this time, the attached 1 Tinkler Hill house was occupied by a maid and domestic servants but there is no information whether they were involved in the business.

The Peatfield family arrived in 1953 and ran the business for twenty-five years. Son Mark is still affectionately known as “Chips” and owns the Eden Outdoors shop in Market Street.

Frank Murray spent the next thirteen years as the proprietor. During this period, the BBC filmed the ‘Wainwright’s Coast to Coast Walk’ with Alfred W. Wainwright, a regular visitor coming in for his usual fish and chip supper when walking in the area. The shop was renamed in his honour, the “Coast to Coast” after his famous cross country long-distance walk and is still famous as a pilgrimage site for followers. Amanda Owen, known as the ‘The Yorkshire Shepherdess’, whose famous farm, Ravenseat is on the route, is also a regular customer. Even Sir Vince Cable, popped in for lunch when he was Secretary of State for Business, Innovation and Skills (2010-2015). 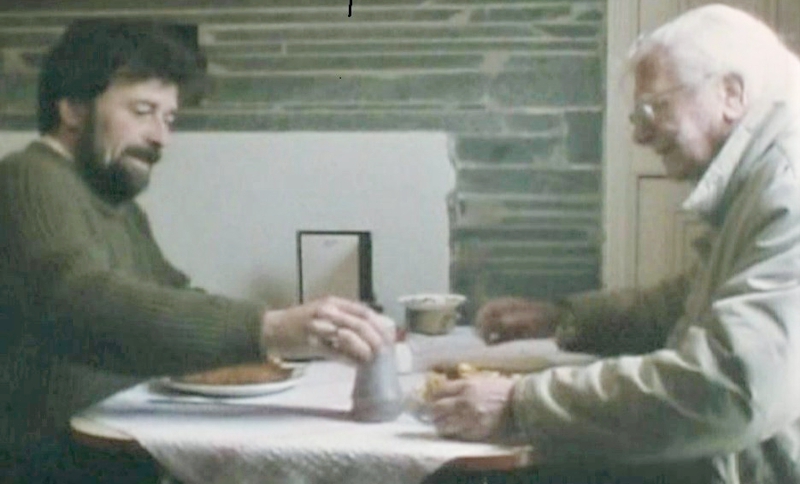 The ‘Coast to Coast’ information board provides the information: ‘Mil and Graham Pollit took over and happily stayed for another twelve years. Known as a pleasant couple that made the shop a huge part of their lives.’[8]

Paul Richardson purchased the business in June 2003. In September 2008, the BBC returned with Julia Bradbury for the remake ‘Wainwright Walks: Coast to Coast’ following in Alfred Wainwright’s footsteps. The shop has also gone through some major changes which include disabled access, an extended restaurant and new menu items ranging from pizza to kebabs but never altering from traditional fresh fish and chips.

Frying tonight are David and Sharron Simpson who arrived in July 2018.