Formerly known as THE WHITE SWAN 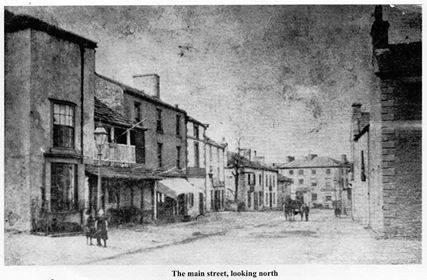 The Green Tree Inn behind the tree trunk in the mid distance (from an old postcard).

Thomas Fawcett drew The White Swan as he remembered it from 1817[1]. Fawcett annotated his drawing as ‘formerly White Swan’, and below it 'T Halls' as the landlord, and under that ‘NOW Green Tree’, and drew a tree beside the building where the cobbles are today.  Swailes[2] has suggested that it was renamed to avoid confusion with the White Lion (now the Taggy Man), a few doors down.

The White Swan then appears to be empty or unlicensed for a while as the next record is for The Green Tree in 1884 with W Ellison[5] as the landlord.  This green tree name arises from a tree that was beside the building dating from before Fawcett’s 1817 drawing, an obvious landmark in the otherwise tree-less Market Street. Whilst the tree has long gone, the current Pharmacy still retains the name. Unfortunately, no one appears to have recorded what species of tree it was (though one unconfirmable source says "elm") or even when it was planted. 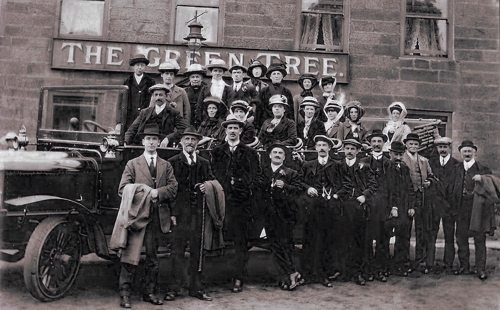 The licensed premises included the rear house which is still evident today from the interior as a pub. The business included the southern section of the front then pair of small shops. The rear Green Tree Yard was another area in the town where there was poorer housing to rent and was particularly used for early railway workers. The Green Tree Inn disappears from the records by 1911.

The information below has been taken from UK Census Records and historical trade directories.

After returning home from his WWII service, William Henry (Harry) Littlefair opened his ironmongers and builders’ merchant new business in 1947 at the former Green Tree Inn. ‘Mr Littlefair has taken the last available premises in the commercial heart of the town ….’[6] Next door at this time in the northern side of the building, was Bell’s Chemist.

(In 1954, W. H. Littlefair moved to larger premises at 18/20 Market Street, formerly the New Fountain Inn, where the Builders’ Merchant business would grow.  Later, under son, Arthur W. Littlefair, the business expanded even further, into adjoining premises until their move to newly built premises in Hobson’s Lane and it was eventually sold to J.T. Atkinson.) 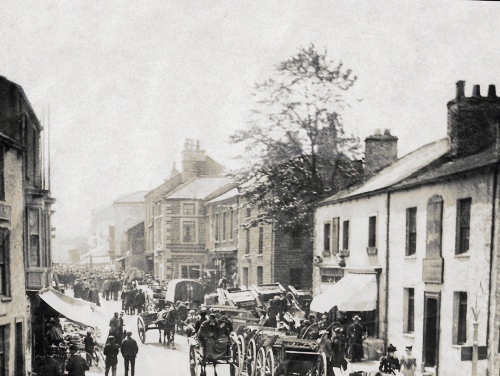 The tree shown on a pre-WWI market day

Meanwhile, back at the former Green Tree Inn, Johnstones, the confectioners and café owners on Fletcher Hill, (since demolished) would be the subsequent occupier of the shop and are remembered as selling ice creams at these premises.

T.W. (Bill) Bell later extended the Chemist's shop into both sides of the building, naming the combined property “The Green Tree Pharmacy” in 1953.  In 1963, T.W. Bell celebrated the pharmacy’s 25 years (1938-1963) with the launch of their “Green Tree Planting Fund”, see below for the proposal leaflet which included drawings of the owners and staff at the time. 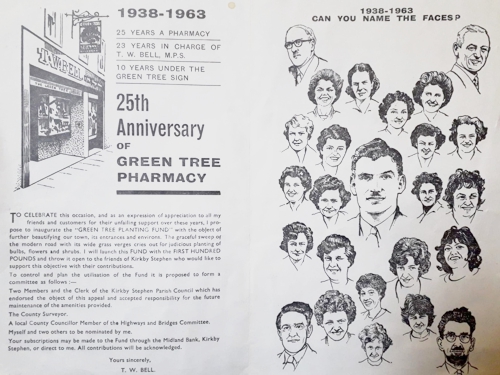 [6] With thanks to Arthur Littlefair MBE for this document quote and information.